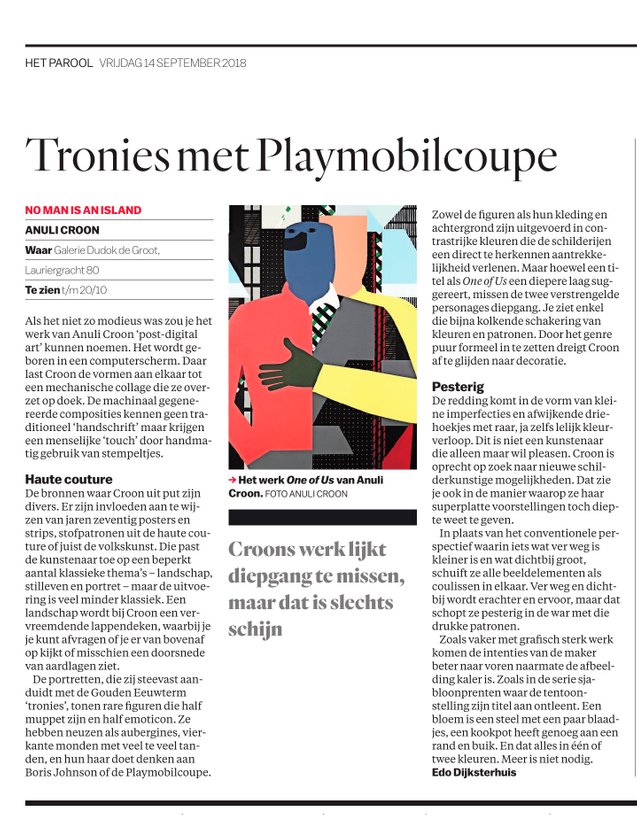 If it wasn't for the fact that it is so fashionable, you might call Anuli Croon's work  'post-digital art'. It is born on a computer screen. That is where Croon assembles the forms that she later transfers to fabric. The machine-generated compositions have no traditional 'handwriting' but are rendered a human touch through the manual use of small stamps.

The sources that Croon draws from are diverse. There are apparent influences of posters and comic strips from the 70s, patterns from haute couture or, by contrast, folk art. The artist applies them to a limited number of traditional themes – landscape, still life and portrait – but the execution is far less traditional. In the case of Croon a landscape becomes an alienating patchwork, and you may wonder whether you look at it from above or see a cross-section of layers of the earth.

The portraits, which she invariably styles 'tronies' – the Golden Age term for faces, mugs – show weird figures half-muppet, half-emoticon. They have noses like aubergines, square mouths with far too many teeth, and their hair reminds you of Boris Johnson or the Playmobil hairstyle.

The figures as well as their clothing and backgrounds are done in colours full of contrast, and which render an unmistakable allure to the paintings. But although a title like 'One of Us' suggests a deeper layer, the two entangled characters lack depth. All you see is that almost seething range of colouring and patterns. By applying the genre is a purely formal sense, Croon threatens to slip into decoration.

But invention is shown in the form of small imperfections and anomalous triangles   with an odd, and even ugly colour balance. This is not an artist merely out to please. Croon is genuinely on the look-out for new painterly possibilities. That is also demonstrated in the way she succeeds in rendering depth to her otherwise super-flat representations.

Instead of the conventional perspective, where something far-away is smaller and what is close by bigger, she fits all the visual elements together like side wings. Far away and close by become behind and in front, but in a provocative fashion she creates a proper mess with those loud patterns.

On the face of it Croon's work is lacking in depth. But that is just make-believe.

As happens more often with graphically good work, the maker's intentions tend to emerge more clearly as the representation is less busy. As in the series of stencil prints from which the title of the exhibition is taken. A flower is a stalk with a few leaves and an edge and a body will do for a saucepan. And all this in one or two colours. That's all it needs.