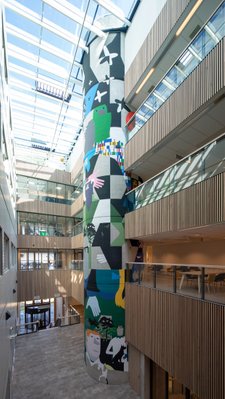 commissioned by The Dutch Ministry of Defense, Central Militairy Hospitaal_CMH 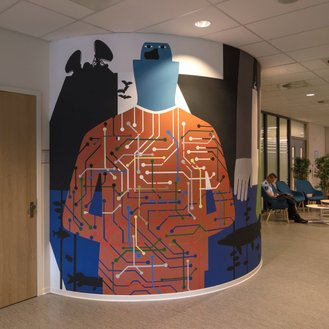 Work of art in the Central Military Hospital commissioned by the Dutch Ministry of Defence.

At the central reception desk of the CMH stands a huge concrete column. Grey concrete, four stories high. Visible from the public space, but also from the four floors, which have a variety of function rooms.

In January 2019 this column was transformed into an eye-catching work of art. All operational units are represented in it and the artwork 'breathes' the core values of both Defence and the CMH.

The column you see in the central hall predominantly shows a pile of figures representing soldiers from the different units. On another scale, rappelling soldiers can be seen as well as soldiers sitting in an observation post. Ribbons have been used as motifs for a garment. The Dutch Lion is shining on a blue scarf.

The three floors at the back of the column are divided into water, earth and air: equipment of Navy, Army, Air Force and Military Police are placed inside. The entire representation is interwoven with an irregular grid of dark and light quadrangles."

a few months after completion, an assignment was added: the request was to design yet another part of the column in the waiting room on the ground floor, this time with a focus on cybercrime.